The GigaSpace.change and the ChangeSet allows updating existing objects in Space, by specifying only the required change instead of passing the entire updated object. 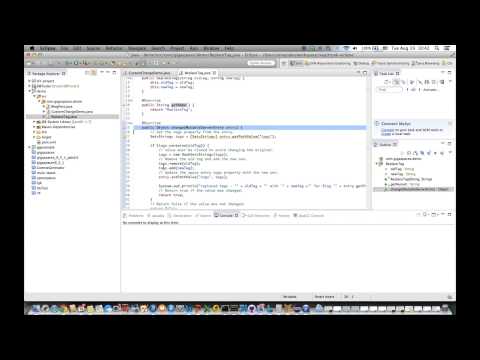 The GigaSpace.change and the ChangeSet allow updating existing objects in the Space, by specifying only the required change instead of passing the entire updated object. This reduces the required network traffic between the client and the Space, and the network traffic generated from replicating changes between Space instances (for example, between the primary Space instance and its backup).

Moreover, using this API also can prevent having to read the existing object prior to the change operation, because the change operation can specify how to change the existing property without knowing its current value. For instance, implementing atomic Counters can be done by increasing a counter property of an integer property by some delta. Another example is adding a value to a collection. The change API supports transactions in the same way the other Space operation supports it, using a transactional GigaSpace instance.

The following example demonstrates how to increment by one the count property of an object of type WordCount, with ID myID.

The change operation can receive any query template for matching a single object or multiple objects that need to be changed by the operation.

The change operation requires a ChangeSet that describes the changes that have to be made after locating the object specified by the query template. The ChangeSet contains a predefined set of operations that can be invoked to alter the object. The set can contain one or more changes that will be applied sequentially to the object. Each specified change can operate on any level of properties of the specified object. This is defined by specifying the path to the property that needs to be changed, where ‘.’ in the path specifies that this change is done on a nested property. For instance:

Each operation in the change set acts on a specified string path. This path points to the property that needs to be changed, and has the following semantic:

The following demonstrates how the path works with a map property instead of concrete properties:

In this case, the key euro inside the map behind the balance will be increased by 5.2.

Change API with the Embedded Model

With the embedded model, updating (as well adding or removing) a nested collection with large number of elements must use the Change API because the default behavior is to replicate the entire Space object and its nested collection elements from the primary to the backup (or other replica primary copies when using the sync-replicate or the async-replicated cluster schema). The Change API reduces the CPU utilization on the primary side, the serialization overhead, and the garbage collection activity on both the primary and backup instances. This significantly improves the overall system stability.

The ChangeResult contains the getNumberOfChangedEntries, which specifies how many objects were changed by this operation (where 0 means none were changed). The getResults property gives further details about the objects that were actually changed by providing a collection that gives details for each of the objects that were changed, such as their ID and version after the change took effect. By default, in order to reduce network overhead, calling getResults will throw UnsupportedOperationException. In order to get the more detailed result, the ChangeModifiers.RETURN_DETAILED_RESULTS should be passed to the change operation.

Upon any error, a ChangeException is thrown containing the following details:

The getNumSuccesfullChanges property contains the number of entries that were successfully changed.

The getSuccesfullChanges property contains details about objects that were successfully changed, just like the ChangeResult.getResults property. This property can only be used if the change operation was executed using the ChangeModifiers.RETURN_DETAILED_RESULTS modifier.

The getFailedChanges property contains details about objects for whom the change operation failed. These details include information about ID, version, and the actual cause for failure.

The getErrors property contains the general reasons for failed change operations that do not apply to a specific object, such as not being able to access the Space.

Multiple Changes in a Single Operation

Multiple changes can be applied in one change operation by setting up multiple operations in the change set. Do this by chaining the changes as follows:

The changes are applied to the object sequentially (and atomically), keeping the order applied in the ChangeSet.

By default, the change operation doesn’t modify the existing remaining lease of the changed entries. In order to change the lease, a new lease should be specified in the ChangeSet using the lease operation.

The lease can be changed as part of other changes applied to the object, or the ChangeSet can include only the lease modification without any property changes.

The lease time specified will override the existing lease with the new value, relative to the current time, while ignoring the current lease.

The above example sets the lease of the changed object to one second from the time the change operation takes effect.

A timeout can be passed to the change operation. This timeout will only be used if any of the objects to be changed is locked under a transaction that is not from the current thread context. In this case, all objects that are not locked are changed, and the operation is blocked until one of the following two events happens:

If there are no matching objects for the specified template/Query, the operation returns immediately without waiting for the timeout to elapse. This is similar to the (read/take)IfExists operation semantic.

The change operation has the same semantics as a regular Space update operation regarding Optimistic Locking. It increases the version of the changed object, and the expected version can be specified in the ID query when optimistic locking is needed.

Change is delivered as a regular update notification, with the state of the object after the change was applied.

The following modifiers can be used with the change operation:

The change operation has also an asynchronous API, in which the operation is dispatched to the server and the result is returned asynchronously via a listener or a future.

This operation behaves exactly like the synchronous change except for the asynchronous result, and it follows Java standard asynchronous semantics.

A SpaceSynchronizationEndpoint implementation can support change operations, and make use of lighter replication between the Space and the mirror. For more information on how to implement this, refer to the Advanced Implementations topic.

Change passes through the Replication Filter like other operations, and can be discarded on the replication level, for example.

See also:
For more information on how to handle change in replication filters, refer to the Advanced Implementations topic.

Add and Get Operations

A common usage pattern is to increment a numeric property of a specific entry, and then to need the updated value after the increment was applied. Using the addAndGet operation, you can meet this need using a single method call to get atomic add and get operation semantics.

The following is an example of incrementing a property called counter inside an entry of type WordCount:

You should use the primitive wrapper types, as the operation semantic is to return null if there is no object matching the provided ID query.

Info
You can use import static org.openspaces.extensions.ChangeExtension. so that you don’t have to prefix the call with `ChangeExtension’.

rownum is not supported with the Changeset SQLQuery operation.