The example is located under <XAP Root>/examples/data 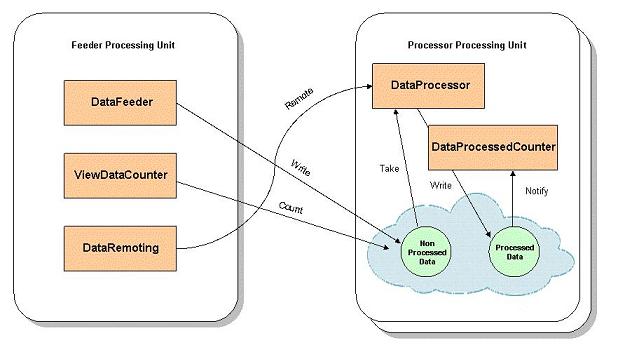 The services described above are independent of each other. They are merely explained here to show the various capabilities of GigaSpaces XAP and the OpenSpaces API.

This example includes a build.xml ant file and with a build.bat/sh script to invoke Ant (there is no need to pre-install Ant, the Ant jars are already bundled in the <XAP Root>/lib/platform directory).

This compiles the code to a pu directory and copies the Processing Unit Deployment Descriptors, namely the pu.xml and sla.xml.

The example uses ant as its build tool and uses a standard build.xml file. It comes with a build script that runs Ant automatically. Running the build script with no parameters within the current directory will list all the relevant tasks that can be run with this example.

Running build.(sh/bat) build will compile all the different modules. In case of the Processor and Feeder modules, it will compile the classes directly into their respective PU structure.

This allows to deploy the data-processor example using a partitioned space (and not a partitioned-sync2backup) which is defined in the sla.xml. In order to run the feeder using the GS CLI please execute gs.(sh/bat) deploy data-feeder/dist/data-feeder.jar.