The Space enables your application to read data from it, and write data to it in various ways. It also deals with various configuration aspects, such as space topologies, persistency to an external data source and memory management facilities.

The Space as the System of Record

One of the unique concepts of GigaSpaces is that its In-Memory-Data-Grid (IMDG or the Space) serves as the system of record for your application. This means that all or major parts of your application’s data are stored in the space and your data access layer interacts with it via the various space APIs. This allows for ultra-fast read and write performance, while still maintaining a high level of reliability and fault tolerance via data replication to peer space instances in the cluster, and eventual persistency to a relational database if needed.

The Space as a cache

Characteristics of a Space

The space has a number of determining characteristics that should be configured when it is created, as described below:

The space can have a single instance, in which case it runs on a single JVM, or multiple instances, in which case it can run on multiple JVMs. When it has multiple instances, the space can run in a number of topologies which determine how the data is distributed across those JVMs. In general, the data can be either replicated, which means it resides on all of the JVMs in the cluster, or partitioned, which means that the data is distributed across all of the JVMs, each containing a different subset of it. With a partitioned topology you can also assign one or more backup space instances for each partition. 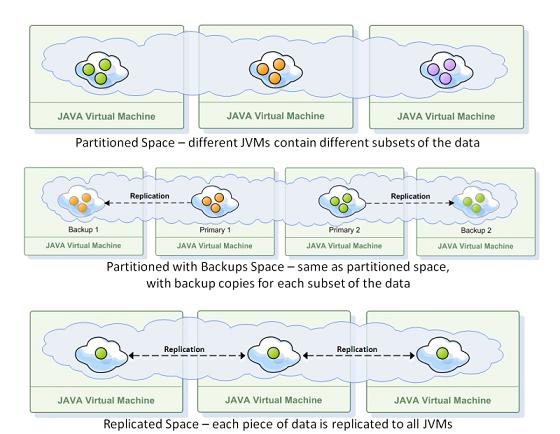 Regardless of the space’s topology, you can also define a “local cache” for space clients, which caches space entries recently used by the client, or a predefined subset of the central space’s data (this is often referred to as Continuous Query). The data cached on the client side is kept up-to-date by the server, so whenever another space client changes a space entry that resides in a certain client’s local cache, the space makes sure to update that client.

The space is an in-memory data grid. As such its capacity is limited to the sum of the memory capacity of all the JVMs on which the space instances run. In many cases, you have to deal with larger portions of data, or load a subset of a larger data set, which resides in an external data source such as a relational database, into the space. The space supports many persistency options, allowing you to easily configure how it interacts with an external relational database, or a more exotic source of data. It supports the following options, from which you can choose:

Since the space is memory-based, it is essential to verify that it does not overflow and crash. The space has a number of facilities to manage its memory and make sure it does not overflow. The first one is the eviction policy. The space supports two eviction policies: ALL_IN_CACHE and LRU (Least Recently Used). With the LRU policy, the space starts to evict the least used entries when it becomes full. The ALL_IN_CACHE policy never evicts anything from the space. The memory manager allows you to define numerous thresholds that control when entries are evicted (in case you use LRU), or when the space simply blocks clients from adding data to it. Combined, these two facilities enable you to better control your environment and make sure that the memory of the space instances in your cluster does not overflow.

The space supports a number of APIs to allow for maximum flexibility to space clients when accessing the space:

Accessing the Space from Other Languages


The code space API is also supported in .Net. This allows clients to access the space via these languages. It also supports interoperability between languages, so in effect you can write an object to the space using one language, say C++, and read it with another, say Java

Services on Top of the Space

Building on top of the core API, the Space also provides higher level services onto the application. These services, along with the space’s basic capabilities, provide the full stack of middleware features that you can build your application with. The Task Execution API allows you send your code to the space and execute it on one or more nodes in parallel, accessing the space data on each node locally. Event containers use the core API’s operations and abstract your code from all the low level details involved in handling the event, such as event registration with the space, transaction initiation, etc. This has the benefit of abstracting your code from the lower level API and allows it to focus on your business logic and the application behavior. Space-Based Remoting allows you to use the space’s messaging and code execution capabilities to enable application clients to invoke space side services transparently, using an application specific interface. Using the space as the transport mechanism for the remote calls, allows for location transparency, high availability and parallel execution of the calls, without changing the client code.

The space APIs are integrated tightly with the Spring framework. This gives you the ability to use all of the benefits that Spring brings to the table, such as dependency injection, declarative transaction management, and a well defined application life cycle model. In addition, the higher level services (remoting and event processing), are also tightly integrated with Spring and follow the Spring framework proven design patterns. GigaSpaces XAP provides a set of well-defined Spring bindings, utilizing Spring’s support for custom namespaces, which allows you to easily create and wire GigaSpaces components within Spring.

The Space as the Foundation for Space-Based Architecture

Besides its ability to function as an in-memory data grid, the Space’s core features and the services on top of it, form the foundation for Space-Based Architecture (SBA). By using SBA, you can gain performance and scalability benefits not available with traditional tier-based architectures, even when these include an in-memory data grid, such as the Space. The basic unit of scalability in SBA is the Processing Unit. The Space can be embedded into the processing unit, or accessed remotely from it. When embedded into the processing unit, local services, such as event handler and service bean exposed remotely over the space, can interact with the local space instance to achieve unparalleled performance and scalability. The Space’s built-in support for data partitioning is used to distribute the data and processing across the nodes, and for scaling the application.