For best performance you should use the ALL-IN-CACHE cache policy with the write-behind mirror. This will ensure maximum hit rate when accessing the cache. With this mode, you should make sure the cache can accommodate all the data you will access.

When you should use an in-line cache?

Side cache without External Data Source:

Side cache with External Data Source:

With a Side Cache architecture there is no Mirror. The application responsible to write changes to the database. Data is evicted or expired from the space by writing it with a finite lease (TTL). There are two options how data is loaded into the space:

The Side cache scenario is widely used with the following GigaSpaces APIs:

When you should use a side cache?

Together with the in-line cache and side cache scenarios, you can also use client cache. This client cache may host data loaded from any IMDG partition. The client cache data access does not involve any serialization or network calls.

In-line cache with a client cache:

Side cache with a client cache:

Side cache using External Data Source with a client cache:


Client cache is not enabled by default.

When you should use a Client Cache?

Client side cache should be used when most of the application activities (above 80%) involves reading data (a read-mostly scenario). When having repeated read activities for the same data (using readById operation), client cache will provide excellent performance boost (up to 100 times faster when compared to when a client cache is not being used). You should not use client cache when having a relatively large amount of data updates or removal operations since the overhead of the client cache updates will impact the overall application performance.

With this approach data is pushed into the cache in a periodic manner via a timer. The Timer will be fetching relevant data that was recently updated within the database and pushing it into the cache. 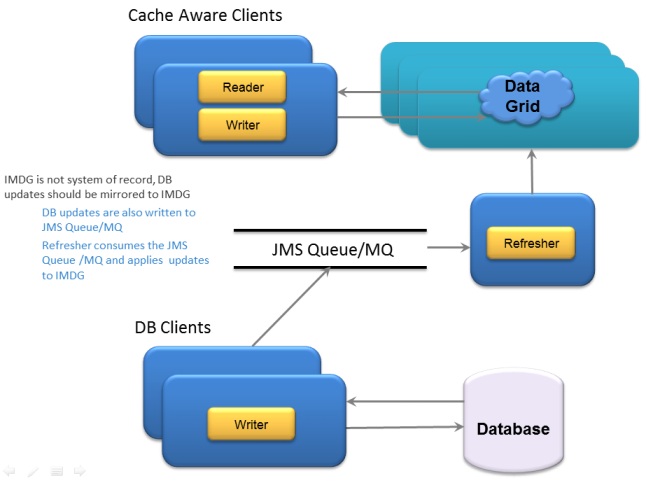 Oracle and few other databases support Database Change Notifications where a client can register a listener for changes to data. Any changes made to the database will trigger the listener defined in a DCN Client. Listener can in turn write these messages into the space.