What Aspects of a Space Object are we Analyzing?

InsightEdge enables developers to store and manage data within a Space Object.

The Space Object contains one or more Object Types, comparable to tables within a database. Object data is stored in memory, and optionally on disk, as configured by the system administrator.

Based on the properties of each Object Type, and the number of occurrences of each property, On Demand Object Analysis calculates the amount of memory stored within a Space Object. In addition, it calculates the memory footprint of the object indexes.

This process is done after the initial provisioning and load of sample data, and is on-going while new services are deployed and additional data is stored within the space.

One use of On Demand Object Analysis is by developers when deploying new services, to determine memory usage. It can be done in a separated staging environment or as part of the initial data load.

Administrators can use object analysis on a daily or weekly basis, to analyze system health and to determine the memory usage for the entire Space Object or for specific object types. It is possible to analyze the data size at the partition level, to identify cases where a specific partition is overloaded with data that could potentially impact its performance.

Although Object Analysis results are a close approximation of memory usage, some variations may exist between the reported results and the exact amount of memory used.

How Do I Perform an Object Analysis?

A dialog box will display, asking for a confirmation of the analysis request:

A default partition is indicated for the analysis, which you may change if desired. Press Run Now to begin the analysis.

Because the Object Analysis process can take some time, a confirmation screen asks if you want to continue: 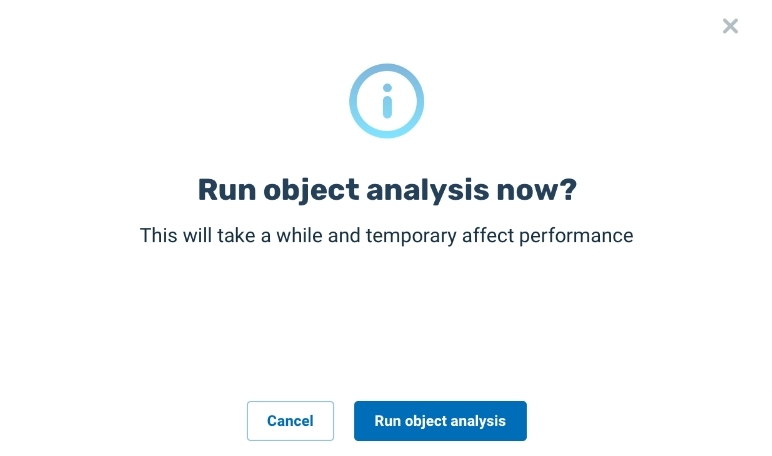 Press Run object analysis to confirm that you wish to begin the analysis.

Because the Object analysis process may consume considerable system resources, it is recommended to run the analysis at an off-peak time, when the system is experiencing relatively low usage.

During the analysis process, the screen appears as follows:

The result of the Object Analysis is two-fold:

When the analysis is complete, a message will appear as follows:

Alternatively, you can click the icon next to the Report icon to see the report:

If the Object analysis is not successful, press Review Logs to determine the cause of the failure.

Contents of the Object Analysis Report

The report appears as follows: 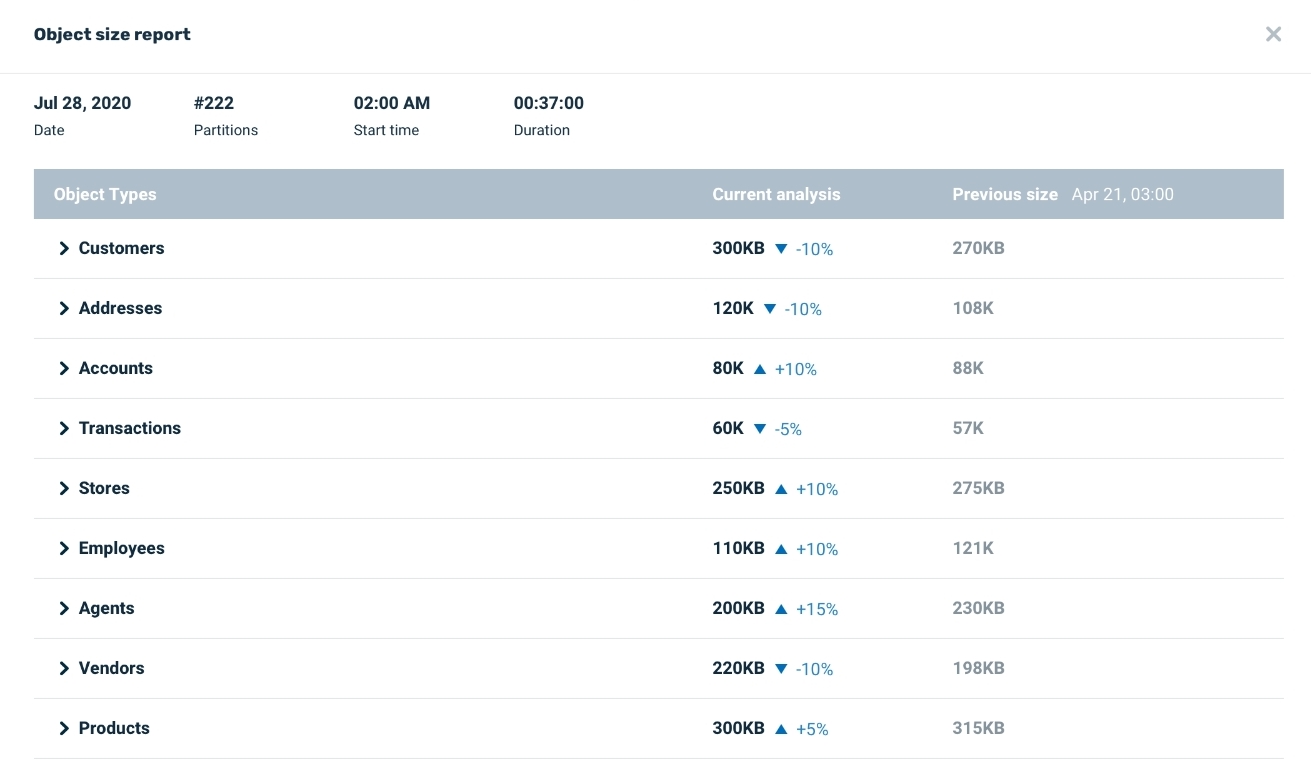 Click on an Object Type to view the Properties and Indexes submenus: 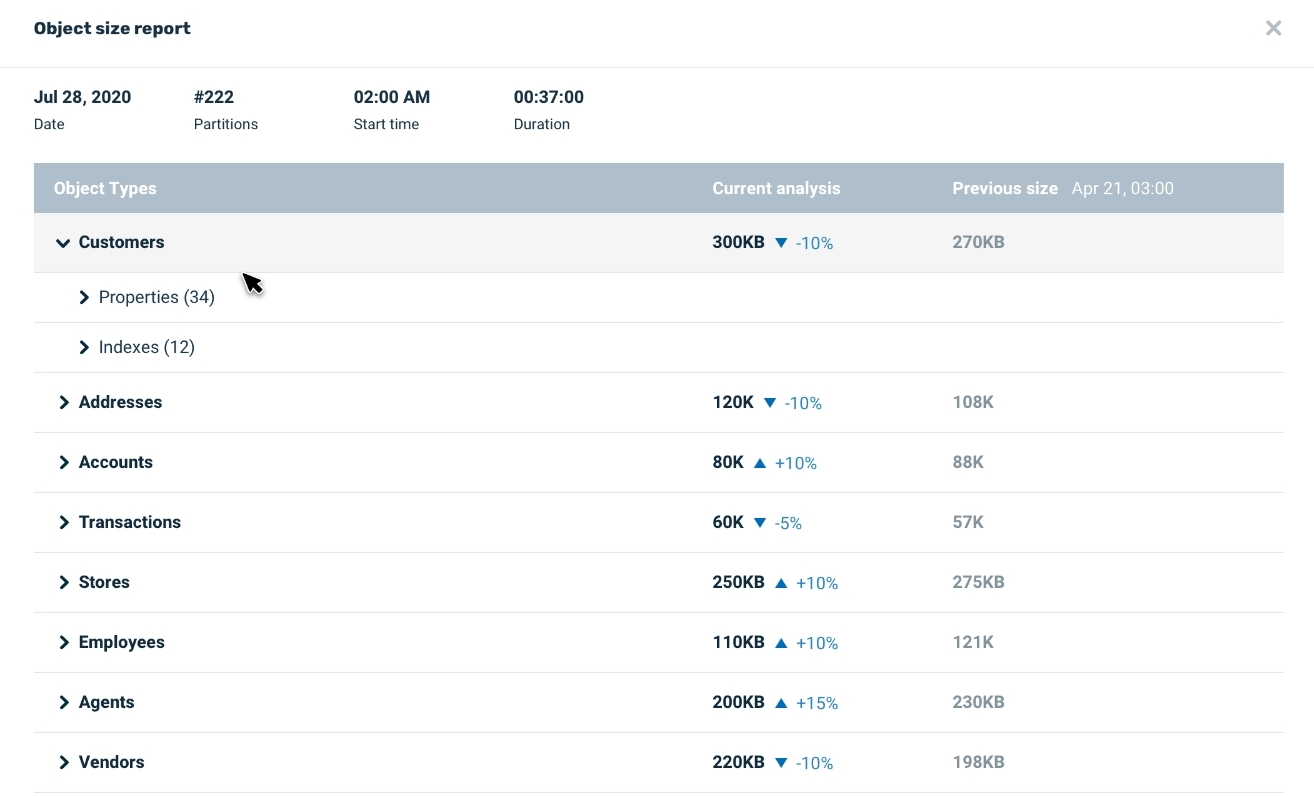 Click on Properties or Indexes to see the average storage requirements.

Note that if a previous Object Analysis had been performed, as in the following example, the report will show a comparison between this analysis and the previous analysis: 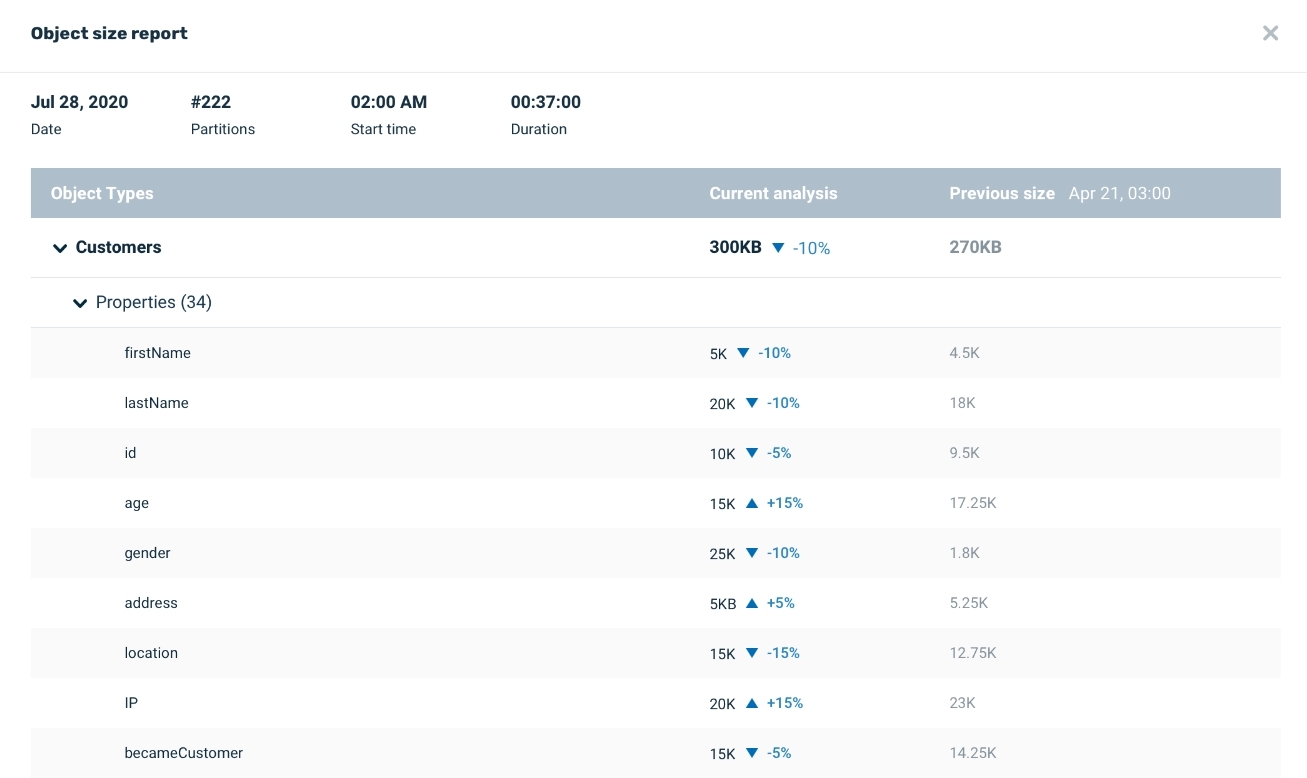 Indexes are stored within the Space and used for fast access to data stored either in memory or on disk. This means that indexes compete with object type data for partition memory resources.

This is why it is important to analyze index sizes and take them into consideration as part of system monitoring and future planning.

If you scroll down the Object Analysis Report, you will see a list of Object Types:

Note that the average RAM size is shown for each object.

Click on a Object (e.g. Customers) to see details for each property in the object: