AnalyticsXtreme is a data lake accelerator that operationalizes your data lake for real-time analytics, which can run simultaneously on both real-time, mutable streaming data and on historical data that is stored on data lakes based on Hadoop, Amazon S3 or Azure Blob Storage, without exposing a separate data load procedure or data duplication. Moving from on-premise to the cloud, or changing technology stacks for example from Cloudera to Amazon S3, is seamless to machine learning applications; increasing flexibility while reducing development and maintenance.

With AnalyticsXtreme, your data is available for immediate searching, queries, and running analytics; there is a single logical view for hot, warm and cold data. The hot data resides on GigaSpaces's in-memory data grid, while cold (historical) data can be stored on any big-data platform such as HDFS or Amazon S3. Additionally, the hot data is mutable, supporting real-time updates. The data becomes immutable when it is stored on the external big data platform. 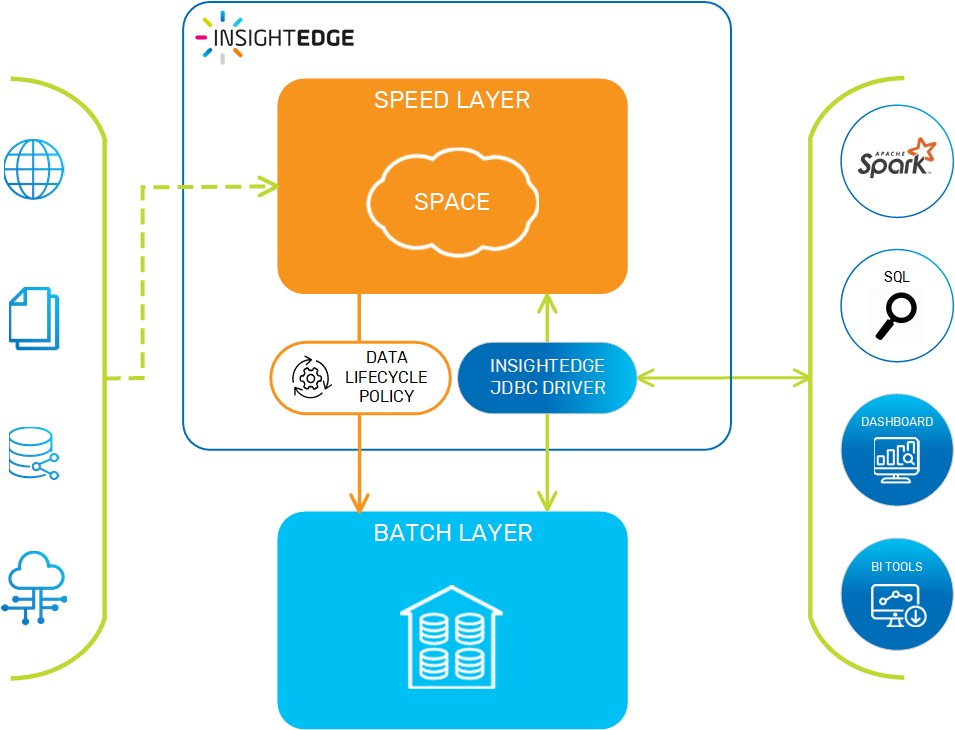 This approach enables smooth access to frequently used historical data, because applications can access any data - hot or cold - via a unified layer using Spark SQL or JDBC. You can easily integrate BI tools such as Tableau, Looker, and PowerBI. It also ensures that every entry is retrieved only once, from the correct layer.

In automatic data tiering mode, AnalyticsXtreme is implemented as shown above. Data is streamed to the speed layer, and from that point on it is managed by the feature's data life cycle policy as it ages and eventually gets moved to the external data source, based on the life cycle that was defined in the policy.

In external data tiering mode, data is streamed to both the GigaSpaces data grid and the external data source in parallel. This means that AnalyticsXtreme provides only the speed layer for the purpose of facilitating accelerated query results, so the data life cycle policy only needs to manage the data until it reaches its expiration point. After it expires, the data is evicted from the data grid. 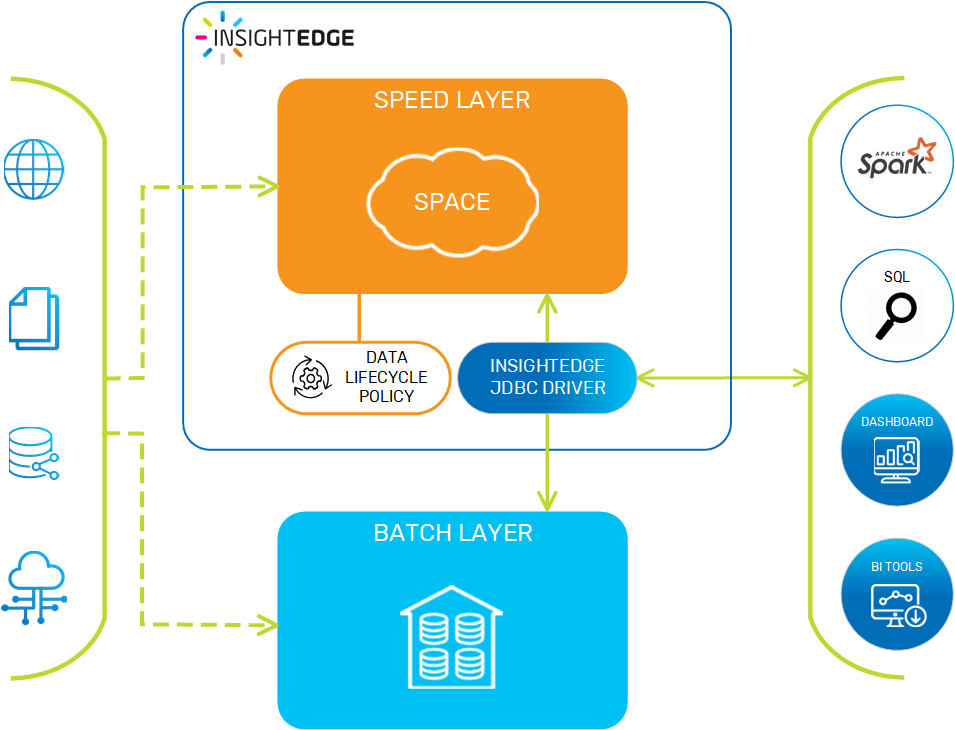 AnalyticsXtreme supports all the data formats that are supported by Apache Spark, such as Apache Parquet and Apache Avro.

AnalyticsXtreme supports Spark/SQL and JDBC for querying the speed and batch layers via the GigaSpaces JDBC driver.

An important function of AnalyticsXtreme is managing the life cycle of the data from the moment it is streamed to the GigaSpaces data grid. In automatic data tiering mode, this includes moving the data from the speed layer (data grid) to the batch layer (external data storage) as it ages and becomes cold. In external data tiering mode, this means evicting the data when it reaches the end of the life cycle.

In order to handle this data transfer or deletion transparently, several things must to be taken into consideration. For example, the business application may trigger a query on the data at any point in time, so AnalyticXtreme needs to know where the data is located in order to successfully complete the query and return accurate results. The query may be complex, and therefore may take a relatively long time to complete. Additionally, there may be remote clients sending their queries, which means network latency needs to be taken into account. And finally, if the network connection isn't stable, the latency period may be even longer for some queries before they are finally received and executed. 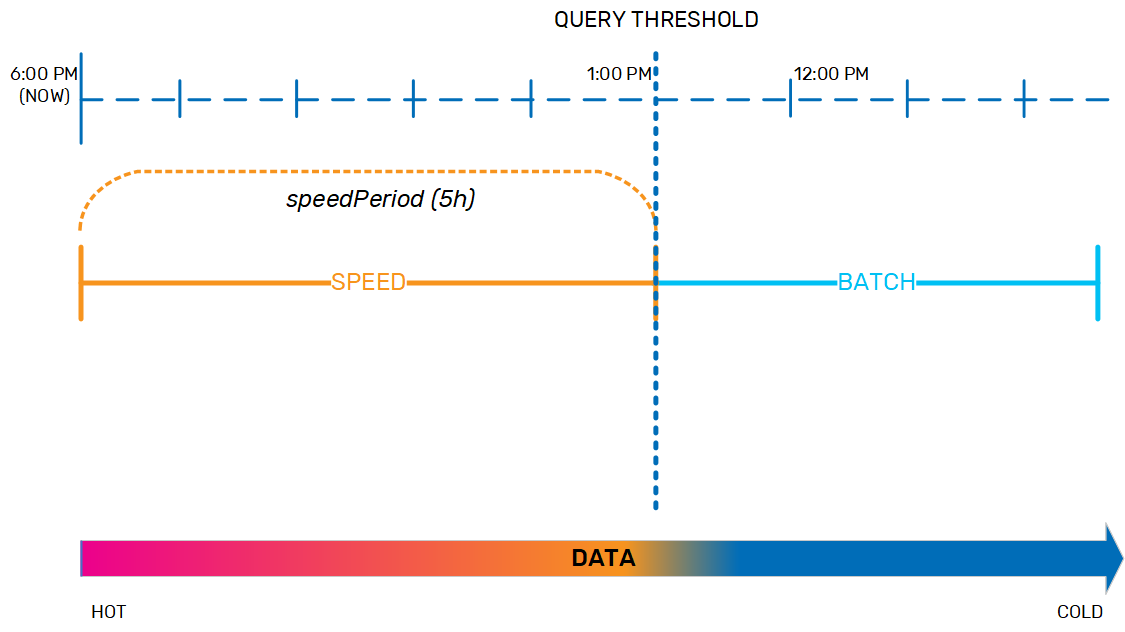 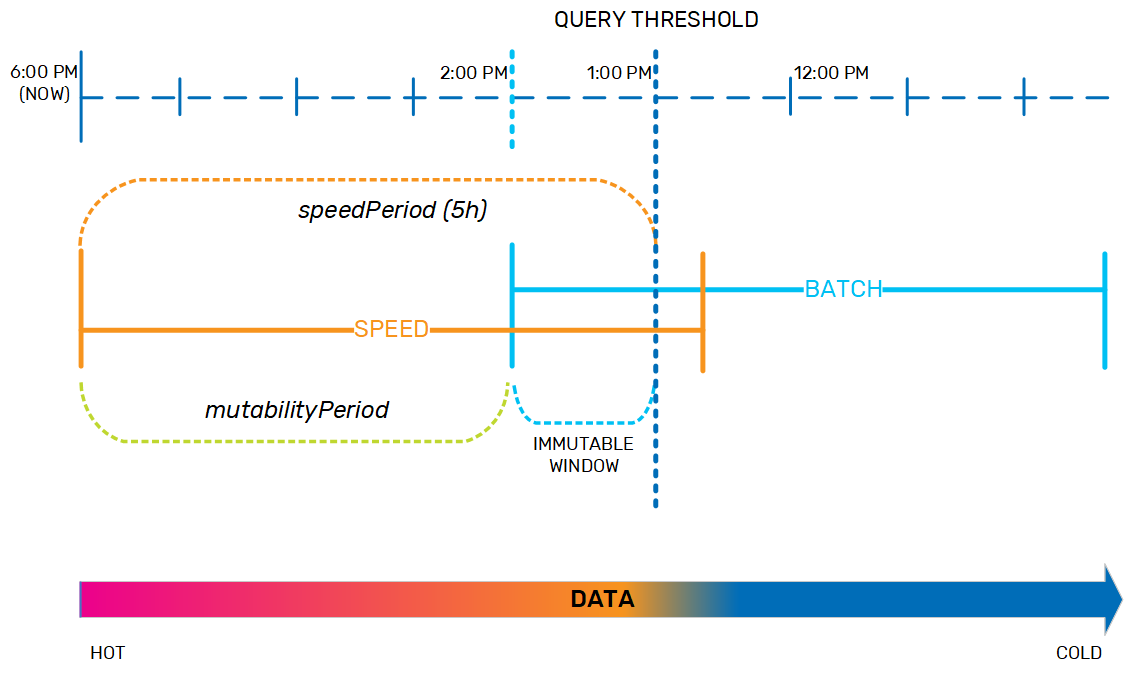 In order to keep system performance consistent, and to ensure that the data can be easily verified when it is moved between layers, if AnalyticsXtreme has been implemented in automatic data tiering mode, the data life cycle policy copies the data from the speed layer to the batch layer in small chunks as it nears the end of the immutable window, according to the batchFeedInterval. At this point, the aging data exists both in the speed layer and in the batch layer. 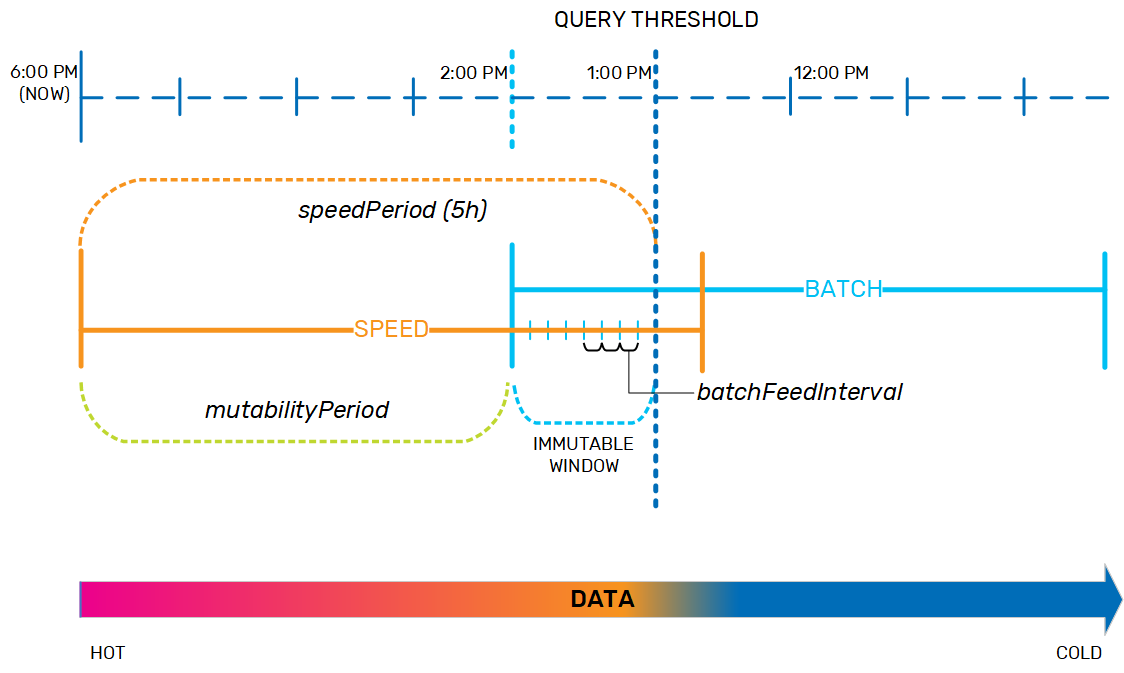 After the aging data is residing safely to the batch layer and the speedPeriod expires, the data needs to be evicted from the speed layer. However, since the query threshold is a sliding window, a small safety margin is needed to ensure that long-running queries can complete, and to account for network latency regarding remote clients that sent queries just before the speedPeriod expired (so the query will need the data to be located in the speed layer). This safety margin, which provides data consistency, is the evictionBuffer, and is set by default to 10 minutes. 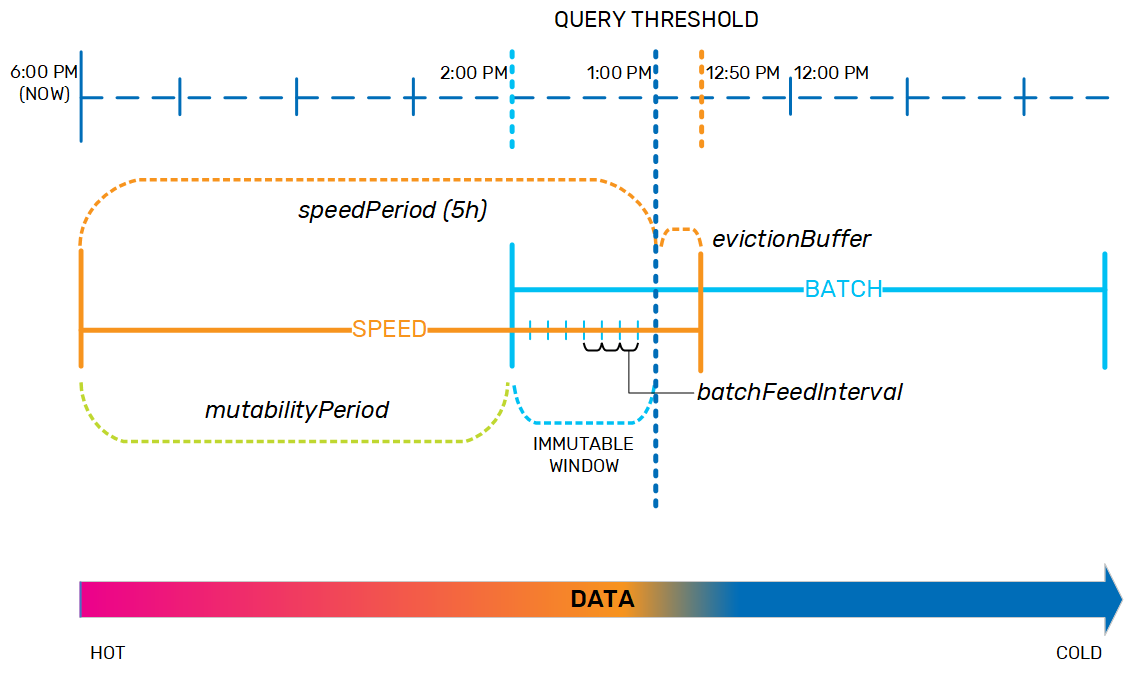 After the data is evicted from the speed layer, it exists as historical data in the batch layer. Any queries that need data that is older than the query threshold (in this example, 1 PM) will access the batch layer only.